Cell Expansion Wars is a strategy game with simple gameplay, and will stimulate the player’s tactical ability along with some other skills. The game has simple features, but it makes the gameplay more attractive, and players will have a better experience when enjoying the game. The game was initially designed to be simple, with bright graphics, vibrant colors, and vivid sound. The game will have countless challenges for players, and each challenge is a battle for the player to show their tactical ability.

The gameplay is simple and focused on tactical elements, unlike other tactical games, the gameplay of this game will focus on the player’s calculating power. Also, the player must logically turn the distribution of power to transform the attack into defense and support each other while the opponent attacks. Players must also know how to choose the enemy before attacking to avoid complex losses, and the gameplay of the game will take place slowly so that the player can timely arrange the army. The challenge of the player is endless, but the further they progress, the more enemies and the player will spend more time to conquer the challenge. However, with some of the game’s bundled features, they will make the gameplay more engaging and interesting, such as an upgrade system. 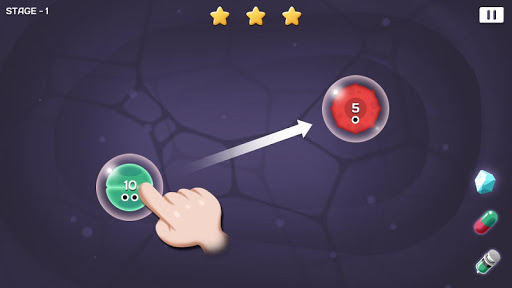 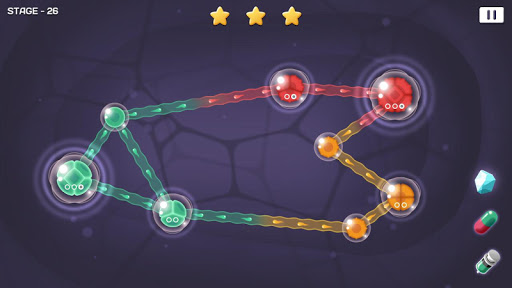 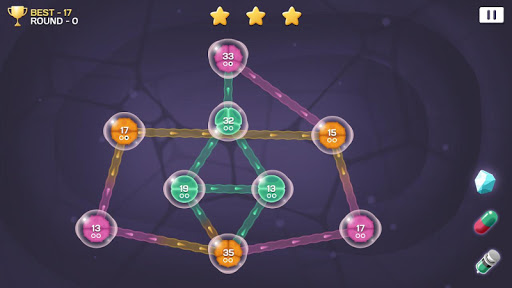 The control mechanism is straightforward, and almost everything can be completed with just drag and swipe. Small bubbles will appear on the battlefield, and numbers will appear on them. Two colors will decide their faction, and that represents two forces. These bubbles have many different roles on the battlefield, and they depend on how the player controls. But the bubbles closest to the enemy will undoubtedly be the defense points. The enemy has an unexpected path, and the player should attack them before things get worse. Moreover, players need to know the balance of attack and defense because the enemy will use some unique tactics that make the player tactics can be disturbed.

A straight line connects the bubbles, the numbers on them symbolize strength. The bigger the number of balls, the stronger the ball, and it can consume the ball with smaller numbers. Depending on how the player connects, it will determine the role of the bubbles. If the player connects directly to the opponent, then the attack process will start and take some time to win. But if the player is attacked, the player can still use the surrounding bubbles to reconnect and prevent the attack. The control mechanism is simple, the rules are easy to understand, but the player must make the right choices not to be destroyed.

Moreover, the numbers on the ball will not change even if the players connect them, but if the value after joining is greater than the attack of the opponent, they can counterattack. Because of this, players should prioritize capturing bubbles of small value from the opponent. Players must also turn forces to consolidate forces quickly to deal with the enemy. Until the opponent’s entire bubble is destroyed, the challenge will end, and the player will continue with the next challenge.

The game also has a lot of exciting things for players to explore. If anyone is confident in their tactical ability, then “Cell Expansion Wars” will be a new experience for them.